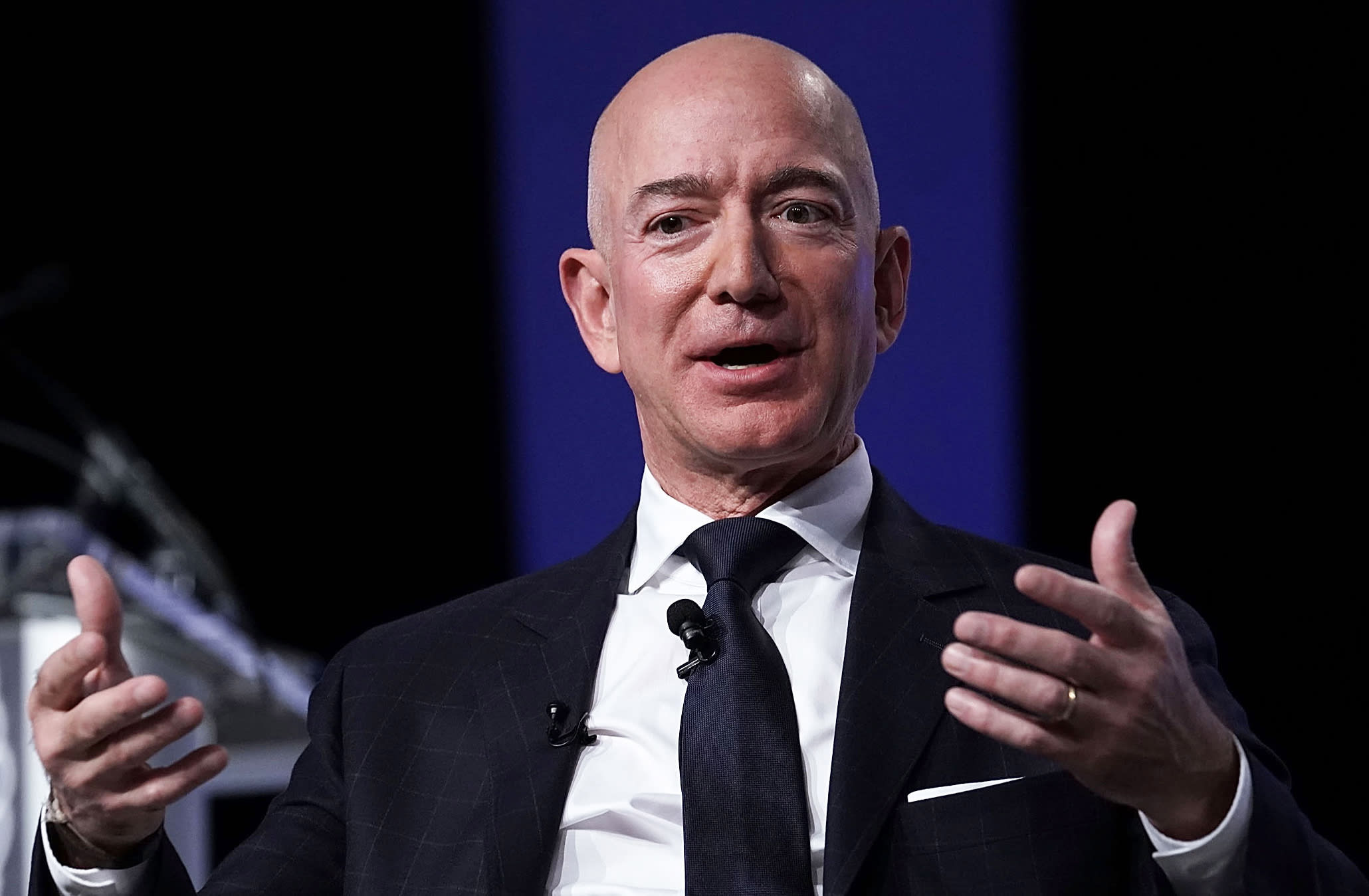 US President Joe Biden speaks about the Covid-19 response as US Vice President Kamala Harris (L) looks on before signing executive orders in the State Dining Room of the White House in Washington, DC, on January 21, 2021.

Like many in the tech industry, Amazon has cozied up to the Democratic Party. Its political action committee and company executives are among those who threw their money behind President Joe Biden on the campaign trail, while Amazon’s top spokesperson, Jay Carney, has longstanding ties to Biden.

But that doesn’t guarantee the next four years of the Biden administration will be smooth sailing for the online retail giant. Antitrust reform, stronger privacy standards and a renewed push for workers’ rights are just a few of the issues that could be on the new administration’s agenda.

Here’s what’s at stake for Amazon in the Biden administration:

After a rocky relationship with Trump’s administration, organized labor is hopeful that Biden will make good on his promises to be “the most pro-union president.” Amazon is likely to keep a close eye on the new administration’s moves on the labor front, as it faces a renewed push from unions to organize its warehouse workers.

Biden has made empowering workers a key tenet of his labor agenda, which also proposes various reforms to labor laws and expanding worker protections. His plan includes policies that would consider a company’s labor record when awarding federal contracts and codify into law an Obama-era change to National Labor Relations Board rules aimed at speeding up union election campaigns.

Biden has also voiced support for the Protecting the Right to Organize Act, which passed the House last February and would levy fines against companies that interfere with workers’ organizing efforts. While the bill is unlikely to pass in the Senate, it could generate new scrutiny of Amazon’s efforts to track workplace unrest, as well as its labor practices.

Former Vice President Joe Biden speaks at a rally organized by UFCW Union members to support Stop and Shop employees on strike throughout the region at the Stop and Shop in Dorchester, Massachusetts on April 18, 2019.

“I would say [the PRO Act] has very little chance of passing,” said Gordon Lafer, a labor studies professor at the University of Oregon and a research associate at the Economic Policy Institute. “So other than that, the question is what could the Biden-appointed Labor Board do unilaterally without needing legislation? There is a lot they could do that would be significant.”

From a high level, Biden’s support of the labor movement has the potential to reignite union membership after years of steady declines. This could pose a threat to Amazon, which has staunchly opposed unions in its workforce. Amazon’s appetite for unions is currently being tested in Alabama, where workers at its Bessemer warehouse are set to vote next month on whether to join the Retail, Wholesale and Department Store Union.

While Biden and Amazon may not see eye to eye on unions, the company is in agreement with Biden on one issue: raising the minimum wage to $15 an hour. In a tweet replying to Biden last week, Amazon touted its $15 minimum wage and said it hopes to work with the administration on making it the national standard.

An Amazon spokesperson didn’t respond to questions seeking clarity on how it would work with the Biden administration on minimum wage issues.

Biden has also telegraphed plans to expand workplace protections by restoring some Obama-era reforms to the Occupational Safety and Health Administration, which were rolled back by the Trump administration. Biden plans to increase the number of OSHA investigators and require companies to electronically report their workplace injuries, among other changes.

This could mean that Amazon and other companies face stricter enforcement of OSHA standards. With more investigators on staff, the agency may be more likely to take up OSHA complaints filed by employees and inspect facilities, as well as levy fines against companies that are found to be in violation of OSHA rules, said Debbie Berkowitz, a former OSHA official who now works for the National Employment Law Project.

“The enforcement switch at OSHA has been turned off, but it’ll get turned back on,” Berkowitz said. “OSHA will again respond to complaints with inspections and there will be a willingness to enforce the law to protect workers.”

Amazon’s workplace safety record continues to be a topic of controversy, including during the coronavirus pandemic. California’s attorney general is investigating working conditions at Amazon’s California warehouses during the pandemic, while some lawmakers have scrutinized the company’s response to the coronavirus crisis.

Amazon workers at Amazon’s Staten Island warehouse strike in demand that the facility be shut down and cleaned after one staffer tested positive for the coronavirus on March 30, 2020 in New York.

The company has previously said it continues to invest in creating a safer work environment at its facilities.

Amazon has bolstered its workplace safety team with a number of people who have ties to OSHA and employment litigation as scrutiny of its warehouse working conditions continues to grow. The company added another staffer from the agency to the workplace safety team this month when it brought on Madeleine T. Le, a former OSHA lawyer, as senior governance and compliance manager.

“Amazon has lawyered up for this,” Berkowitz said. “They are lawyering up to start fighting OSHA inspections.”

Amazon spokeswoman Rachael Lighty said the company has expanded its workplace health and safety team as part of its efforts to ensure its workplaces are “leading in state-of-the-art safety investments, training and education, and safety programs.”

“Today, our global workplace health and safety team is comprised of more than 5,000 employees who use Amazon’s innovation, technology and data insights, combined with exceptional experience and leadership in the safety industry, to ensure the highest standards to keep our employees safe,” Lighty said.

Biden has offered few hints on how he would approach antitrust issues, beyond expressing concern over the power Silicon Valley giants wield in tech and other industries. But there are signs he will take a tougher stance on reining in Big Tech than the Obama administration, which has been criticized for its close ties to tech companies.

While Google and Facebook are currently the focus of investigations on the federal level, Amazon is unlikely to escape antitrust scrutiny with Biden in the Oval Office.

Amazon is already being probed by Federal Trade Commission officials over its business practices in retail and cloud computing, according to reports from several outlets. Last year, the House Judiciary subcommittee on antitrust found that Amazon has monopoly power over third-party sellers. Amazon and its rivals, including Facebook, Google and Apple, also face a separate probe from the Justice Department.

“This was a problem in the Obama administration that I was part of,” Harman said. “There was a flavor of ‘Google is great and a Google revolving door is a positive thing.’ That is no longer OK.”

Another tech policy that’s likely to be in focus in the new administration is Section 230 of the Communications Decency Act, which shields tech companies from being liable for what users post on their platforms.

Similar to social media companies, the law protects e-commerce sites from being held liable for any user-generated content on their platforms, like product descriptions or customer reviews.

Amazon has invoked Section 230 as a defense in some product liability lawsuits concerning faulty products sold on its website, arguing that it merely provides the platform for third-party merchants to hawk their wares, so it’s not actually the seller.

The company also pointed to Section 230 in defending its decision to drop Parler, a social media site popular with Trump supporters, from its cloud-computing platform in the wake of the U.S. Capitol riot on Jan. 6.

Biden has called for Section 230 to be revoked, arguing that companies should be held accountable for hosting content they know to be false.

It’s unclear how the Biden administration may seek to reform Section 230. Democrats and Republicans agree there are issues with the law, but they’re divided on why it merits a review. Generally, Democrats hope to hold platforms more responsible for policing false speech and calls to violence, while Republicans worry about inconsistent moderation practices that censor politically conservative viewpoints.

With Democrats in control of Congress, lawmakers could revive attempts to regulate facial recognition technology and establish a federal privacy law.

Biden and Vice President Kamala Harris recognized the need for changes to privacy and facial recognition laws before they entered the White House. Biden said in an interview with The New York Times last year that the U.S. “should be setting standards not unlike the Europeans are doing relative to privacy.”

Last year, two partisan privacy bills were introduced by Senate Commerce Committee Chairman Roger Wicker, R-Miss., and Ranking Member Maria Cantwell, D-Wash. While lawmakers agree on the need for a federal privacy law, they continue to disagree on whether the national law should preempt state bills and if individuals should be allowed to sue companies over privacy violations.

Lawmakers are already examining the data Amazon collects from consumers. Last month, the Federal Trade Commission sent letters to Amazon, Facebook, Twitter and several other tech companies requiring them to hand over information about how they collect and use data.

In 2019, Amazon and other members of the Business Roundtable wrote to congressional leaders saying the support the creation of a consumer data privacy law.

Amazon would be impacted by any federal limits on facial recognition technology, such as those proposed in the Facial Recognition and Biometric Technology Moratorium Act, a bill that seeks to ban federal law enforcement use of the technology.

Groups that advocate for racial justice and privacy rights are hoping the Biden administration will take up the call to keep the technology out of the hands of law enforcement permanently.

“Amazon, along with other Silicon Valley companies, are raking in billions of dollars by selling this really dangerous tool to law enforcement,” said Myaisha Hayes, campaign strategies director at advocacy group Media Justice. “We’re hoping that with this administration we can convince more members of Congress to take police tech surveillance really seriously.”

Snap is launching a competitor to TikTok and Instagram Reels