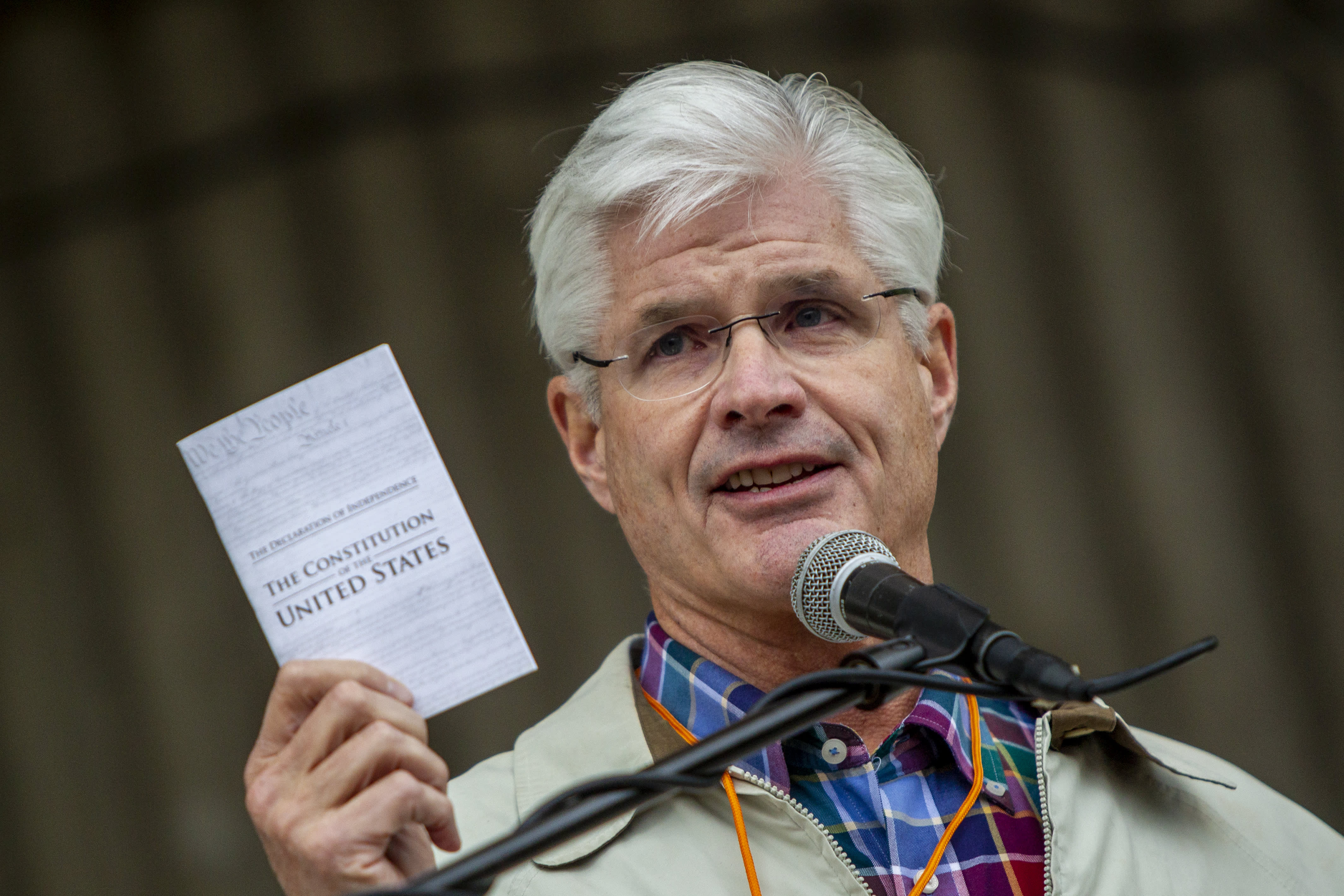 President Donald Trump‘s effort to reverse Joe Biden’s projected win the presidential election was dealt a big blow Friday night when top Michigan state lawmakers said that the Democrat’s victory in their own state still looks legitimate even after meeting with Trump in the White House.

Those Republican lawmakers, state Senate Majority Leader Mike Shirkey, and Speaker of the House Lee Chatfield, also pointedly said they would follow state law and not seek to have the legislature replace Biden’s electors with a slate of their own in the Electoral College.

Shirkey and Chatfield issued a joint statement after an unprecedented meeting with Trump, where the president, who had invited them, was expected to lean on them to try to invalidate Biden’s win in their state.

Trump and his campaign’s lawyers loudly argued, without evidence, that widespread fraud in Michigan and elswhere robbed him of the election.

“We have not yet been made aware of any information that would change the outcome of the election in Michigan and as legislative leaders, we will follow the law and follow the normal process regarding Michigan’s electors, just as we have said throughout this election,” the Michigan lawmakers said.

“Michigan’s certification process should be a deliberate process free from threats and intimidation,” the statement said.

“Allegations of fraudulent behavior should be taken seriously, thoroughly investigated, and if proven, prosecuted to the full extent of the law,” they said.

“And the candidates who win the most votes win elections and Michigan’s electoral votes. These are simple truths that should provide confidence in our elections.”

Under Michigan law, its legislature is barred from appointing its own electors who are different from the slate of electors of the presidential candidate who won the popular vote in the state.

Earlier Friday, Shirkey and other lawmakers were greeted Friday by protestors’ signs saying “SHAME” and chants of “certify the vote” as they arrived at Reagan International Airport, just outside Washington, D.C., before their White House meeting.

Trump’s invitation to the lawmakers in an effort to have them invalidate the popular presidential vote is believed to be unprecedented.

“It is difficult to imagine a worse, more undemocratic action by a sitting American President,” said U.S. Sen. Mitt Romney, R-Utah. Romney was the 2012 GOP nominee for president; his late father, George Romney, had been governor of Michigan.

White House spokeswoman Kayleigh McEnany told reporters Friday that Trump’s sitdown with lawmakers was not an advocacy meeting, and also said that no one from Trump’s campaign — other than Trump himself — would be at the meeting.

But a Michigan Republican leader close to both Shirkey and Chatfield, who also was invited by Trump to the meeting, told NBC News that both men expected the president to pressure them to try to reverse Biden’s win in their state.

“I’m sure the president is going to try to convince them to do this,” the leader told NBC News, referring to both overruling the vote certification and having the legislature appoint its own electors to the Electoral College, as opposed to Biden’s electors.

But “I find it hard to believe” they will comply with that request, the leader said.

In their statement, Shirkey and Chatfield said that at the meeting they delivered a letter to Trump making clear their support for more federal funds to help Michigan combat the coronavirus pandemic.

Michigan has 16 votes in the Electoral College, and is one of several states that Trump narrowly won in 2016 during his race against Hillary Clinton. But the Republican incumbent lost the state to Biden this year. Nationally, Biden is projected to win 306 electoral votes, 36 more than he needs to secure the presidency.

Trump has refused to concede the election to Biden and to allow federal officials to begin a process that would allow the Democrat to start a transition to the next administration.

Trump and his campaign’s legal team, which is being led by former New York City Mayor Rudy Giuliani, have repeatedly claimed without evidence that the president was swindled out of a victory in the national election and in Michigan in particular by widespread fraud.

They also have falsely claimed that Trump actually won the election.

But the campaign and its allies have either lost or withdrawn most of their court cases making such claims or otherwise seeking to challenge ballots in multiple states.

On Thursday, the Trump campaign abruptly dropped a federal lawsuit which had sought to block the certification of votes in Wayne County, Michigan, which includes Detroit.

Giuliani and other lawyers for the campaign falsely claimed that the suit was dropped because the campaign had gotten what it wanted: a refusal by Wayne County elections officials to certify votes there.

In fact, the county elections board had voted to certify the results. But two GOP board members who originally opposed the certification, only to vote to confirm the results after an outcry that their objections were baseless, now say they want to rescind their confirmation votes.

Media outlets reported that the canvassers had been contacted by Trump directly on Tuesday evening.

One of them, Monica Palmer, told NBC News that she and Trump did not discuss her decision to rescind her vote “or anything like that.”

“My conversation with the President was about threats coming from the public and my safety — not about rescinding my vote,” Palmer told NBC.

Michigan’s secretary of state has said there is no legal way for the GOP members to rescind the votes they cast.

And in any event, state officials and lawyers say, even if the Wayne County board had failed to certify votes there, the ballots would have been certified by a state-level board.

The Michigan lawsuit by the campaign was dropped a day after two women in Michigan who had a similar federal lawsuit related to the Detroit ballots withdrew their own case. Their lawyers told CNBC that the women dropped their case because it covered much of the same issues as that of the Trump campaign’s suit, which they had expected, incorrectly it turned out, would continue in the court.

Within hours of the campaign’s Michigan case being dropped, the campaign lost a court case in Pennsylvania related to the tallying of ballots in a county there, saw the Republican Party in Arizona lose a challenge to the vote certification in Maricopa County, and saw a federal judge in Georgia deny a request to block the state from certifying its vote count.

All four of those states were won by Biden, according to current projections.

The secretary of state of Georgia on Friday certified the results of its presidential election race, confirming that Biden defeated Trump, after a hand recount of the ballots. Trump’s campaign has until the close of business on Tuesday to seek a machine recount of the ballots cast in Georgia.

The Trump campaign has requested a recount of results in two counties in Wisconsin. The results in those counties, which went heavily for Biden, gave him his margin of victory in the state.

Amazon delays Prime Day until October due to coronavirus