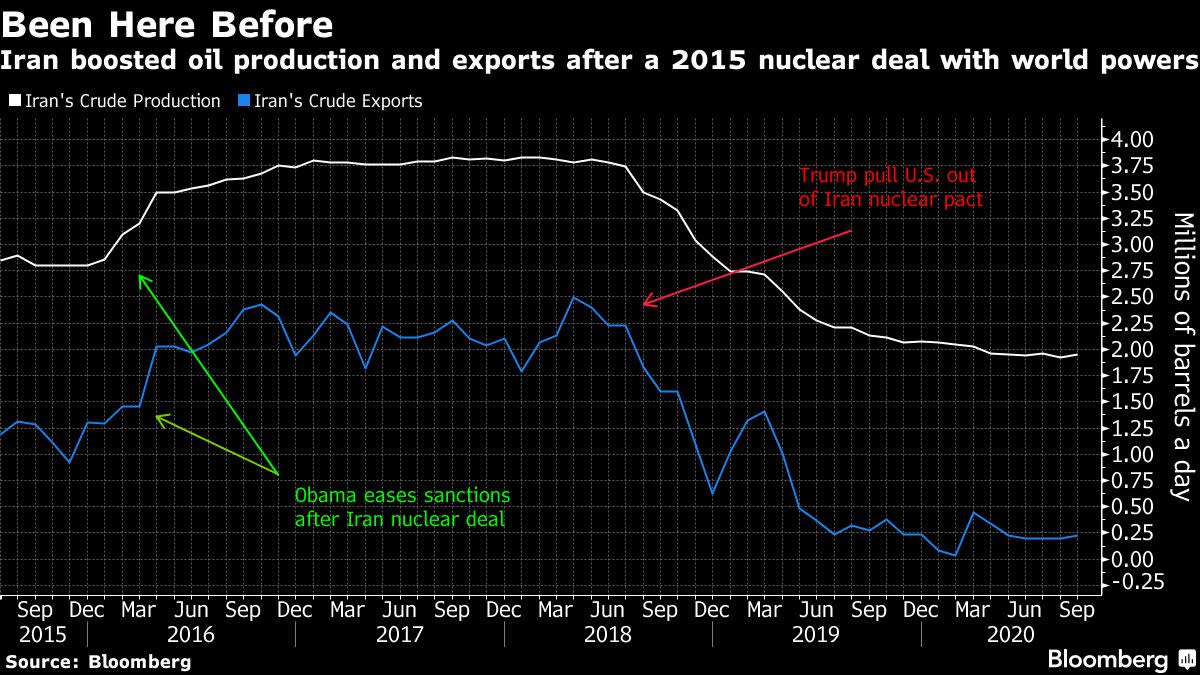 (Bloomberg) — For fragile oil markets, the outcome of next week’s U.S. election poses yet another risk: the prospect that major producer Iran may regain its role in international trade.

Challenger Joe Biden, leading in most polls, has signaled he’ll seek to bring Iran back into the 2015 nuclear accord the U.S. brokered when he was vice president under Barack Obama. That means the economic sanctions President Donald Trump imposed — and tightened further this week — could eventually be eased, opening the sluices for more than 2 million barrels a day of Iranian crude exports.

The timing for the oil market is fraught. The OPEC cartel, which includes Iran, is restraining supply to prop up prices as the coronavirus ravages demand. Brent crude dropped around 3% on Thursday to below $38 a barrel, extending its slump this year to more than 40%.

If Biden wins, Wall Street banks including Goldman Sachs Group Inc., JPMorgan Chase & Co. and RBC Capital Markets LLC see 1 million barrels a day or more of Iranian crude hitting the market next year. In Tehran, the country’s leaders aren’t saying how much or how soon they could boost output and exports should the U.S. rejoin the nuclear pact — known as the Joint Comprehensive Plan of Action — and start peeling away sanctions.

Iran has the capacity to pump around 3.8 million barrels a day, data compiled by Bloomberg show. It’s producing only about half that amount and consuming most of the crude itself.

“Within a few months after a Biden election, we expect some Iranian oil will be coming to market,” said Iman Nasseri, the London-based managing director for the Middle East at consulting firm FGE. “It’s going to be a real headache for OPEC.”

The Organization of Petroleum Exporting Countries and allied producers such as Russia agreed in April to withhold 9.7 million barrels a day, or about 10% of global supply, from the market. The coalition eased those cuts in August, but is reassessing its plan to taper them further in January, in light of renewed pandemic lockdowns in Europe and elsewhere, plus the surprise revival in production from Libya as a truce takes hold in the war-torn nation.

A surge in shipments from Iran could wreck the OPEC+ cuts agreement and cause prices to buckle even more.

Yet Iran’s rapid return to the market, even if Biden wins, is no sure thing. A deal to let the Persian Gulf country sell more oil might have to wait until its own presidential vote next June. If a more conservative government comes to power, as many analysts expect, Tehran may drive a much harder bargain with the U.S. before agreeing to resume negotiations over its nuclear program. This could push back the timing for any removal of sanctions.

U.S. domestic politics could further complicate matters. A new approach to Iran would surely face opposition in Congress and from an American public conditioned to think of the country as a foe since its Islamic Revolution in 1979. By tightening sanctions this week, Trump may make it tougher for a successor to offer Iran significant relief.

The longer it takes to reach a possible deal, the less of an impact Iran’s oil may have on prices or on OPEC+’s deliberations, according to Giovanni Staunovo, a commodity analyst at UBS Group AG and Ehsan Khoman, MUFJ Bank Ltd.’s Dubai-based head of Middle East research. Both analysts said investors haven’t yet priced in Iran’s return to markets.

However, a U.S. president has authority to ease sanctions through executive orders or by issuing waivers that allow the purchase of Iranian oil. Sanctions waivers might serve as a sweetener for Iran to return to talks. The U.S. authorized waivers in the past, and FGE’s Nasseri said it’s likely that Biden would reintroduce them.

The White House would also need to address the concerns of its allies in the Gulf. While a Biden administration might take a tougher line with Saudi Arabia, the kingdom is OPEC’s biggest producer and Iran’s main geopolitical rival. If more Iranian barrels translate into lower crude prices, the Saudis and other Arab petro-states will suffer.

“Using oil sanctions relief as a bargaining tool in 2021 is a bad idea because of how other regional exporters will react,” said Karen Young at the American Enterprise Institute in Washington. She suggests instead that the U.S. offer aid or release Iranian cash that it seized in overseas accounts. “Some kind of economic relief is an imperative and an incentive to get them to the negotiating table,” Young said.

Under Trump, increasingly punitive sanctions have crippled Iran’s economy and reduced its crude sales to a fraction of what they were four years ago. Trump reversed the policy of his predecessor Obama, who joined with other world powers in the 2015 deal to relax sanctions on Tehran in exchange for limits on its nuclear activities.

After sanctions were eased, Iran added 1 million barrels of daily production in one year to the 2.8 million it was already pumping. Exports rose faster, by 700,000 barrels a day in the four months ending in April 2016.

Biden would have a better chance than Trump of reaching a deal, said Mohammad Ali Khatibi, Iran’s former OPEC envoy and an ex-official at the state oil company. Trump insists that Tehran halt what he considers to be geopolitical meddling in nations such as Iraq, Lebanon and Yemen before he agrees to any talks — a demand that Iran rejects.

“If Mr. Biden returns to the JCPOA and observes Iran’s interests under the deal, Iranian oil exports will increase,” Khatibi said on Monday. “But should he choose to follow the way of Mr. Trump and make human rights and regional issues a prelude to lifting sanctions on Iran’s oil, the situation will not change much.” 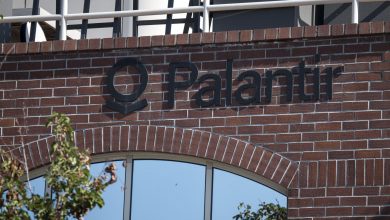 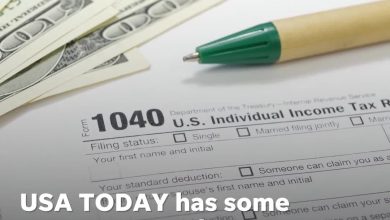 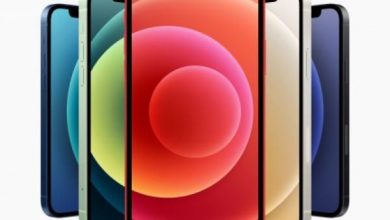