The Dow Jones Industrial Average traded 900 points lower, or 3.2%, and was headed for its biggest one-day loss since June 11. The S&P 500 slid 2.7% and the Nasdaq Composite dipped 2.5%. Monday’s decline erased the monthly gains for the Dow industrials.

“To me, this is Phase 2 of the pandemic,” said Frank Rybinski, chief macro strategist at Aegon Asset Management. “Until we get some eradication of the virus, it’s going to be like a gray cloud” over the market. Rybinski added his firm has been “reducing risk” from its portfolios in recent months.

Optimism also dimmed that the White House and Republicans could strike a stimulus deal with Democrats before the election. White House economic advisor Larry Kudlow told CNBC’s “Squawk Box” on Monday that talks had slowed down, but noted they are still ongoing.

House Speaker Nancy Pelosi, D-Calif., said in a statement that: “in all of our legislation, we have stressed the importance of testing, but the Administration has never followed through. The Republicans’ continued surrender to the virus – particularly amid the recent wave of cases – is official malfeasance.”

She also noted that a deal must be reached “as soon as possible,” but added that “we cannot accept the Administration’s refusal to crush the virus, honor our heroes or put money in the pockets of the American people.”

“The market is likely to drift lower near term (first SPX support at 3,209) in the face of Stimulus disappointment … virus resurgence, and intensifying election uncertainty,” said Julian Emanuel, strategist at BTIG.

Stocks with the most to lose from rising cases and a stalled stimulus plan led the decline Monday. Royal Caribbean shares fell 10.1%. Delta fell 5.4%.

SAP, one of the biggest software companies in Europe, saw its shares plunge more than 20% after warning that businesses are holding back from spending; it also cut its earnings and revenue estimates for 2020. Oracle and Microsoft followed SAP lower, sliding 4.4% and 2.4%, respectively.

“The double whammy of a stalled stimulus bill and new highs in cases is a harsh reminder of the many worries that are still out there,” said Ryan Detrick, chief market strategist at LPL Financial. “Most of the recent economic data has been strong, but when you see parts of Europe going to back to rolling shutdowns, it reminds us this fight is still far from over.”

This week marks the last week of October and the final trading period before Nov. 3. Former Vice President Joe Biden maintains a sizable lead over President Donald Trump in national polls, although the gap has narrowed slightly as of late. 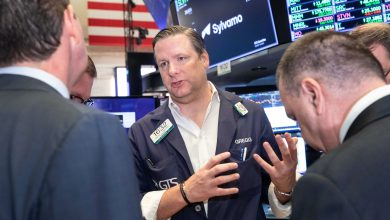 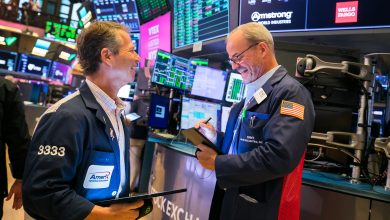 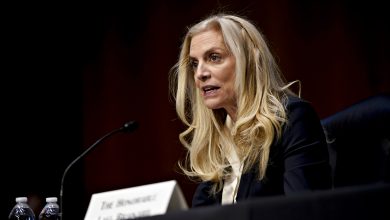 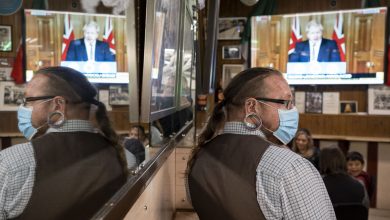