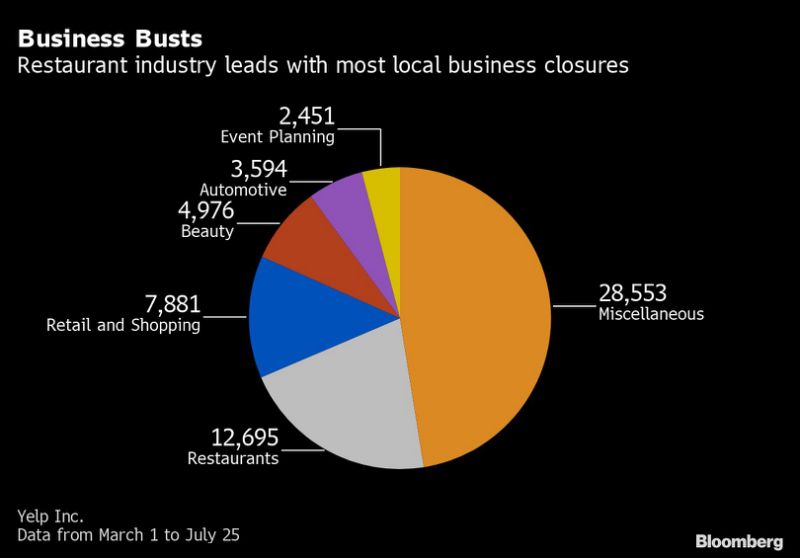 (Bloomberg) — Big companies are going bankrupt at a record pace, but that’s only part of the carnage. By some accounts, small businesses are disappearing by the thousands amid the Covid-19 pandemic, and the drag on the economy from these failures could be huge.

This wave of silent failures goes uncounted in part because real-time data on small business is notoriously scarce, and because owners of small firms often have no debt, and thus no need for bankruptcy court.

“Probably all you need to do is call the utilities and tell them to turn them off and close your door,” said William Dunkelberg, who runs a monthly survey as chief economist for the National Federation of Independent Business. Nevertheless, closures “are going to be well above normal because we’re in a disastrous economic situation,” Dunkelberg said.

Yelp Inc., the online reviewer, has data showing more than 80,000 permanently shuttered from March 1 to July 25. About 60,000 were local businesses, or firms with fewer than five locations. About 800 small businesses did indeed file for Chapter 11 bankruptcy from mid-February to July 31, according to the American Bankruptcy Institute, and the trade group expects the 2020 total could be up 36% from last year.

While the busineses are small individually, the collective impact of their failures could be substantial. Firms with fewer than 500 employees account for about 44% of U.S. economic activity, according to a U.S. Small Business Administration report, and they employ almost half of all American workers.

Justine Bacon permanently shut her Yoga Brain studio in Philadelphia after deciding it was too dangerous to hold indoor classes because of the pandemic. Bacon didn’t file for bankruptcy, she just simply closed up shop and went out of business on June 30.

“I felt it better to close with some money in the account and not have to worry about bankrupting the business,” said Bacon, 35.

Chapter 11 bankruptcy gives a business protection from its creditors while the owners work out a turnaround plan. For smaller companies, though, the extra time might not make any difference. “Bankruptcy cannot create more revenue,” said Robert Keach, a restructuring partner at New England-based Bernstein Shur and former president at the American Bankruptcy Institute.

Some owners fear bankruptcy could scar their credit reports and hurt their future chances to rebuild. Bankrupt businesses have a nearly 24 percentage point higher likelihood of being denied a loan, according to the SBA, and a filing can show up on a credit report for 10 years.

That’s one of Rebecca Schner’s concerns. Things were looking up for Schner, 51, and her jewelry and fair trade shop New Lotus Moon in The Woodlands, Texas. She opened in 2018 and finally started to break even at the start of this year.

Then the virus hit. After the store closed to walk-in customers, she said sales dropped and she couldn’t cover rent. She emptied the shop around mid-May, moved her jewelry cases into storage, and dismissed her part-time employee. She’s making minimum payments on nearly $50,000 in loans.

“What if I want to have a mobile boutique and go buy a vehicle for that? Would I be able to get a loan?” Schner said.

To be sure, small business attrition is high even in normal times. Only about half of all establishments survive for at least five years, according to the SBA. But the swiftness of the pandemic and the huge drop in economic activity is hitting hard among typically upbeat entrepreneurs. About 58% of small business owners say they’re worried about permanently closing, according to a July U.S. Chamber of Commerce survey.

In a June 2020 NFIB survey, a net 31% of owners reported lower sales in the past three months, while 7% reported higher sales a year earlier. In the same survey, only 13% of business owners said it was a good time to expand, a dip from 24% a year earlier.

Jose Gamiz, 45, and Leticia Gamiz, 52, closed their restaurant in Glendale, Arizona on July 31. The bills started piling up, and while thousands in government loans helped, they weren’t taking in enough cash. They had four part-time employees.

It was too much of a gamble to keep Mi Vegana Madre open, Jose Gamiz said. The couple knew the dangers of taking risks after they lost the first house they bought during the 2008 crisis.

“We wanted to take that as a lesson,” Jose Gamiz said. “Sometimes it’s okay to let it go and not expend every penny.” 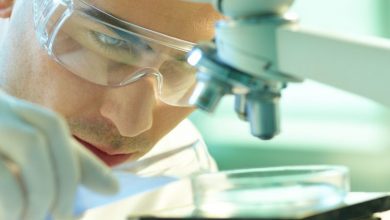 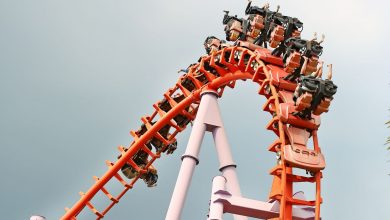 Bitcoin Price Drops $1,000 Before Recovering in Sharpest Sell-Off in 3 Weeks 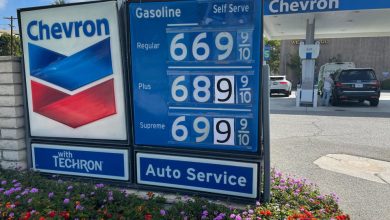 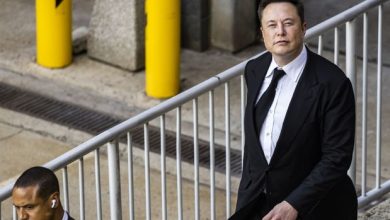 Elon Musk Keeps Dumping Tesla Stock. He Owns More Now Than He Did When He Started Selling.