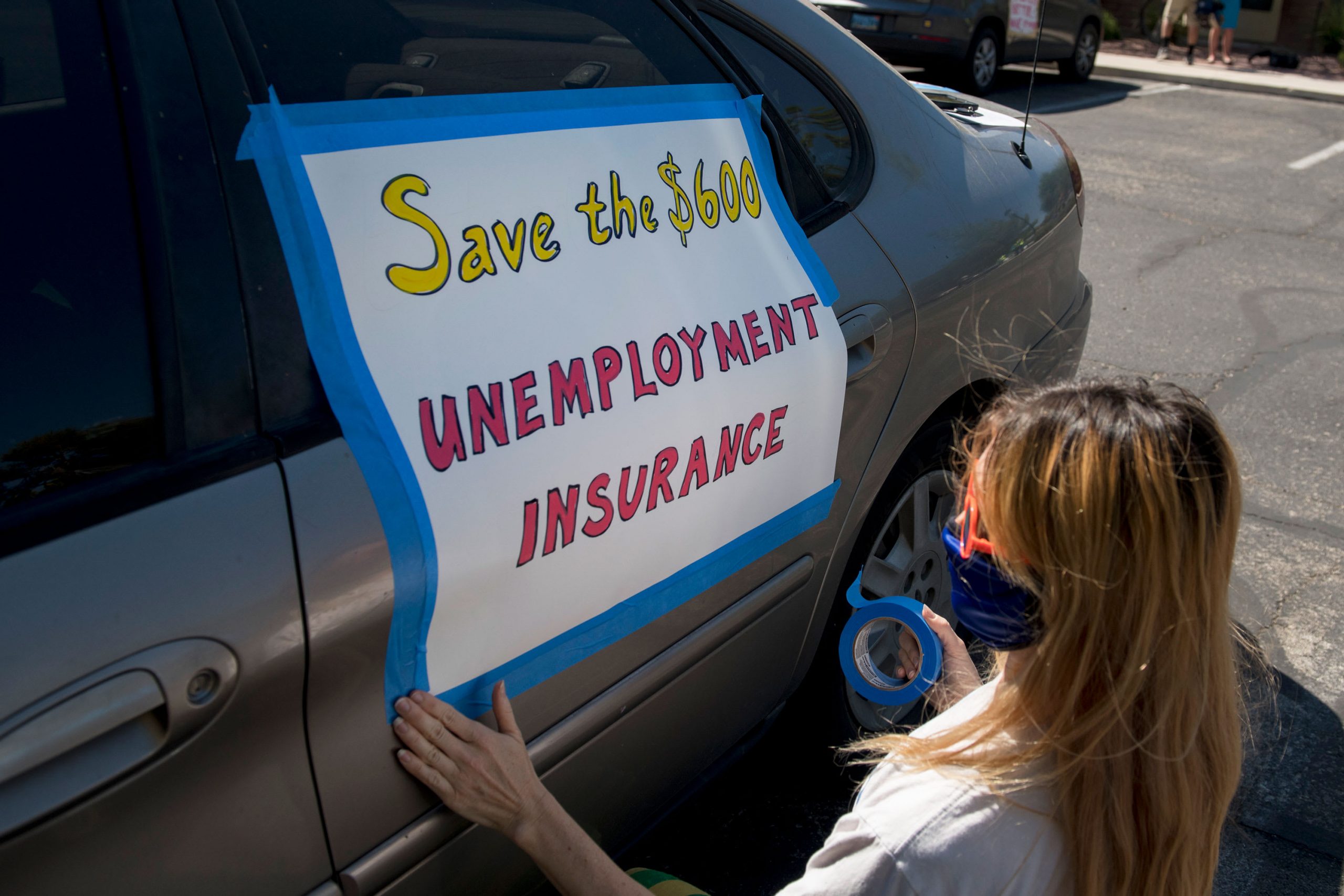 Francis Stallings tapes signs to her car before participating in a caravan rally down the Las Vegas Strip in support of extending the $600 unemployment benefit, August 6, 2020 in Las Vegas, Nevada.

As Congress flounders in its attempts to buoy Americans left jobless by the coronavirus pandemic, voters in six swing states blame Republicans and Democrats equally, according to a new CNBC/Change Research poll.

The $600 per week federal unemployment insurance supplement lapsed at the end of July after lawmakers failed to pass legislation to extend it. Congress passed the benefit in March to sustain people put out of work by widespread closures designed to curb the outbreak.

As coronavirus relief talks in Washington stall and millions of people stare down financial ruin, voters in six key 2020 election states put the onus on both parties, according to the survey released Wednesday. It found 40% of respondents blame Democrats on Capitol Hill most, while 39% hold President Donald Trump and congressional Republicans most responsible. Another 18% said they blame both parties equally.

Partisan leanings inform voters’ views on who shoulders the responsibility. The poll found 78% of Democrats blame Trump and the GOP, while 19% fault both parties equally. Four-in-five Republicans put the onus on Democrats and 11% hold both sides equally liable. Among independents, 40% blame Democrats, 31% fault the GOP and 25% hold both parties responsible, the survey found.

The poll, taken from Friday through Sunday, surveyed 2,701 likely voters in the states of Arizona, Florida, Michigan, North Carolina, Pennsylvania and Wisconsin. It has a margin of error of plus or minus 1.9 percentage points.

Those six states will play a major role in determining whether Trump or Democratic former Vice President Joe Biden will win the White House in November, and whether Republicans will hold their Senate majority. The poll indicates that voters there have not yet assigned clear blame for a debacle in Congress that has left millions of people scrambling to cover their costs of living.

House Democrats first passed a bill in May that extended the $600 per week jobless benefit into January. The GOP then released its counter offer in the last week of July. It called to cut the extra unemployment insurance to $200 a week through September, then set the payment at 70% wage replacement.

Democrats say Republicans have failed to recognize the gravity of the crisis and waited too long to try to extend the unemployment benefits. The GOP says Democrats allowed the payments to lapse because they rejected White House offers to temporarily extend the insurance while the sides hashed out a larger relief package.

In an election year shaped by government failure to contain the virus, relief for jobless Americans is a critical issue. Trump recognizes his peril as polling averages show him trailing Biden in most 2020 swing states.

After coronavirus aid talks between his administration and Democrats collapsed on Friday, the president took a series of constitutionally questionable executive actions to try to continue pandemic relief. The measures extend the extra jobless benefit with payments of at least $300 per week, sustain student loan assistance, offer loose protections from eviction and create a payroll tax holiday.

It is unclear now when negotiators in Washington will strike an aid deal and pass legislation. Unemployment insurance is one of the thorny issues still holding up talks as Democrats insist on maintaining the $600 per week benefit. Some Republicans oppose even a $200 weekly payment.

The White House reportedly offered last week to support extending the supplemental insurance at $400 per week into December. Asked if $400 would be sufficient, 33% of respondents to Wednesday’s swing-state poll said the sum would not be enough.

Another 31% responded that it is about the right amount. Meanwhile, 23% said the payment would be too much.

As the parties try to assign blame for Congress’ failure to pass more assistance, the CNBC/Change poll shows a competitive presidential race in the swing states. Biden leads Trump by a 48% to 44% margin across the six states.

Biden has an edge in five of the six individual states, though the matchups in some are closer than others.

As voters prepare to cast a historic number of ballots by mail during the pandemic, Trump has faced criticism for delays in mail delivery after he appointed campaign donor Louis DeJoy to lead the U.S. Postal Service. Democrats have pushed for additional funding and operational overhauls at USPS to ensure timely ballot delivery.

A larger share of Democrats (64%) than independents (36%) and Republicans (14%) responded that they are likely to vote by mail.

Half of respondents said they are confident their ballots will be secure and get counted if they cast them by mail. The question sharply divided voters by party affiliation, as Trump makes unfounded claims that mail-in ballots pose a major fraud risk.

Four-in-five Democrats said they were confident their mail-in votes would count. About half, or 48%, of independents and only 19% of Republicans said the same. 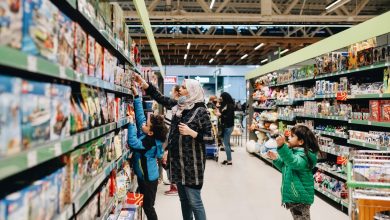 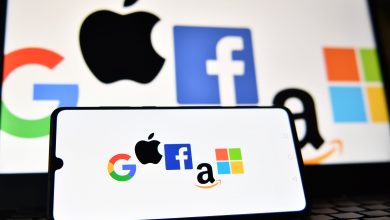 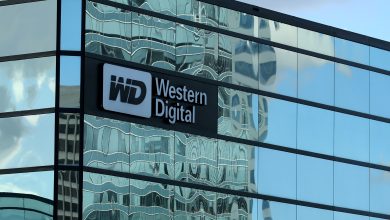 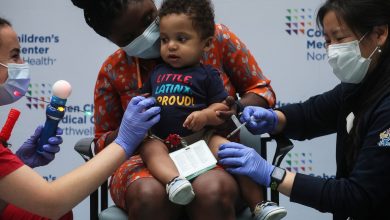 Timing, side effects, vaccine selection: Everything you need to know about Covid vaccinations for kids under 5