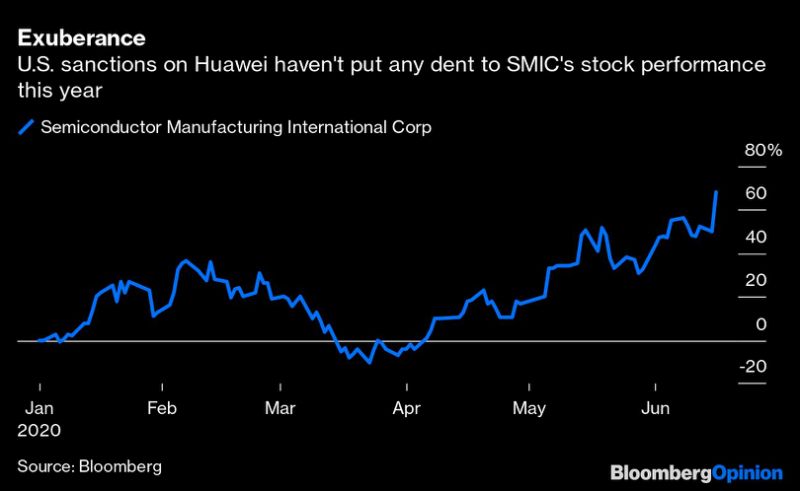 (Bloomberg Opinion) — From Seoul to Taipei, large-cap companies are treated with reverence, boasting almost uniform buy recommendations from brokerage analysts. But in Hong Kong, a Chinese semiconductor foundry, which has gained over $7 billion in market cap this year, is stirring up controversy and splitting Wall Street titans.

I’m talking about Shanghai-based Semiconductor Manufacturing International Corp., which counts Huawei Technologies Co. as its largest client. Of the 33 sell-side analysts tracked by Bloomberg, only 14 have a buy rating, with the rest an outright sell or hold, which in the analyst world amounts to a polite no.

The negative sentiment is easy to justify. Shortly after May 15, when the U.S. placed further restrictions on Huawei, Credit Suisse Group AG promptly downgraded SMIC. The new rules require that any chip supplier using American technology get a license before selling to Huawei. So unless that’s granted, or this policy is withdrawn, foundries from Taiwan Semiconductor Manufacturing Co. to SMIC will have to stop doing business with the tech giant, the bank noted. Last year, Huawei accounted for 19% of sales at SMIC, and 14% at TSMC. The Taiwanese company has already halted new orders from Huawei, according to some reports.

SMIC has become expensive by all traditional metrics. It’s now trading at 53 times 2021 earnings, versus TSMC’s 17.7 times. It’s cheaper on a price-to-book basis, but its return-on-equity is only 4.6%, well below the very profitable TSMC’s 23.4%. So what does Goldman see in SMIC?

China’s vast domestic demand. SMIC’s advanced-processing-nodes unit has the potential to mass produce at least three times as many smartphone chips as Huawei by 2025, the bank estimates. As long as SMIC gets some new business at home, U.S. sanctions on Huawei won’t move the needle.

This is a seductive narrative. SMIC fits nicely into President Xi Jinping’s Made in China 2025 initiative, which aims to produce 70% of chips domestically, versus about 20% currently. Tsinghua Unigroup’s Unisoc, China’s second largest mobile chip designer after Huawei’s HiSilicon, could start using SMIC for mass production, Goldman mused. Both are backed by the state-owned China Integrated Circuit Industry Investment Fund, simply known as the Big Fund. As of 2019 year-end, the Big Fund owned close to 20% of SMIC.

On the financing front, SMIC sure behaves like a national champion already. Last year, it received $293 million in government funding, an 87% jump from 2018; subsidies accounted for a quarter of its Ebitda. On May 15, the day Huawei got slapped with further sanctions, SMIC said the Big Fund and a Shanghai municipal fund would invest about $2.5 billion into one of its wafer plants. It’s also on a fast track to raise at least 20 billion yuan ($2.8 billion) on the mainland’s Nasdaq-style Star market.

To be sure, the technology gap between SMIC and market leader TSMC will persist, which explains why the Taiwan rival is so much more profitable. But as long as SMIC is seen as a national champion — it’s China’s most advanced semiconductor foundry — cheap state money will keep rolling in and will help close the gap. The company’s return-on-equity could improve to 14% by 2025, says Goldman.

Mainland investors are certainly big believers. Last week, they bought a net $148 million worth of SMIC stock, the most hotly sought company on the southbound trade of the Hong Kong Stock Connect. Buying remains brisk this week.

Just like the rest of its economy, Hong Kong’s $4.8 trillion stock market is a busy battleground for cultural clashes, with U.S. fund managers’ dominance gradually giving way to aggressive mainland investors. While foreigners may see SMIC as collateral damage to Huawei’s sanctions; all the Chinese see is state support. This disconnect is being played out in analyst ratings. Goldman is just taking the Chinese view. 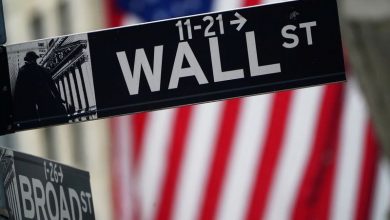 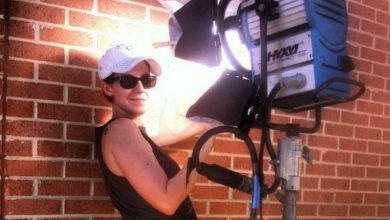 Amateur investors: 'I didn't know I'd lose money so fast' 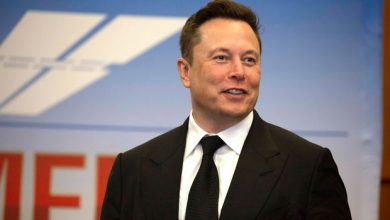 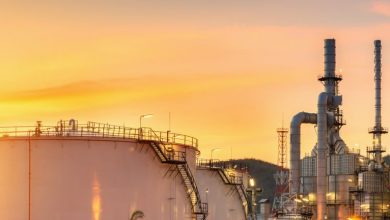 Here's What We Like About DHT Holdings' (NYSE:DHT) Upcoming Dividend