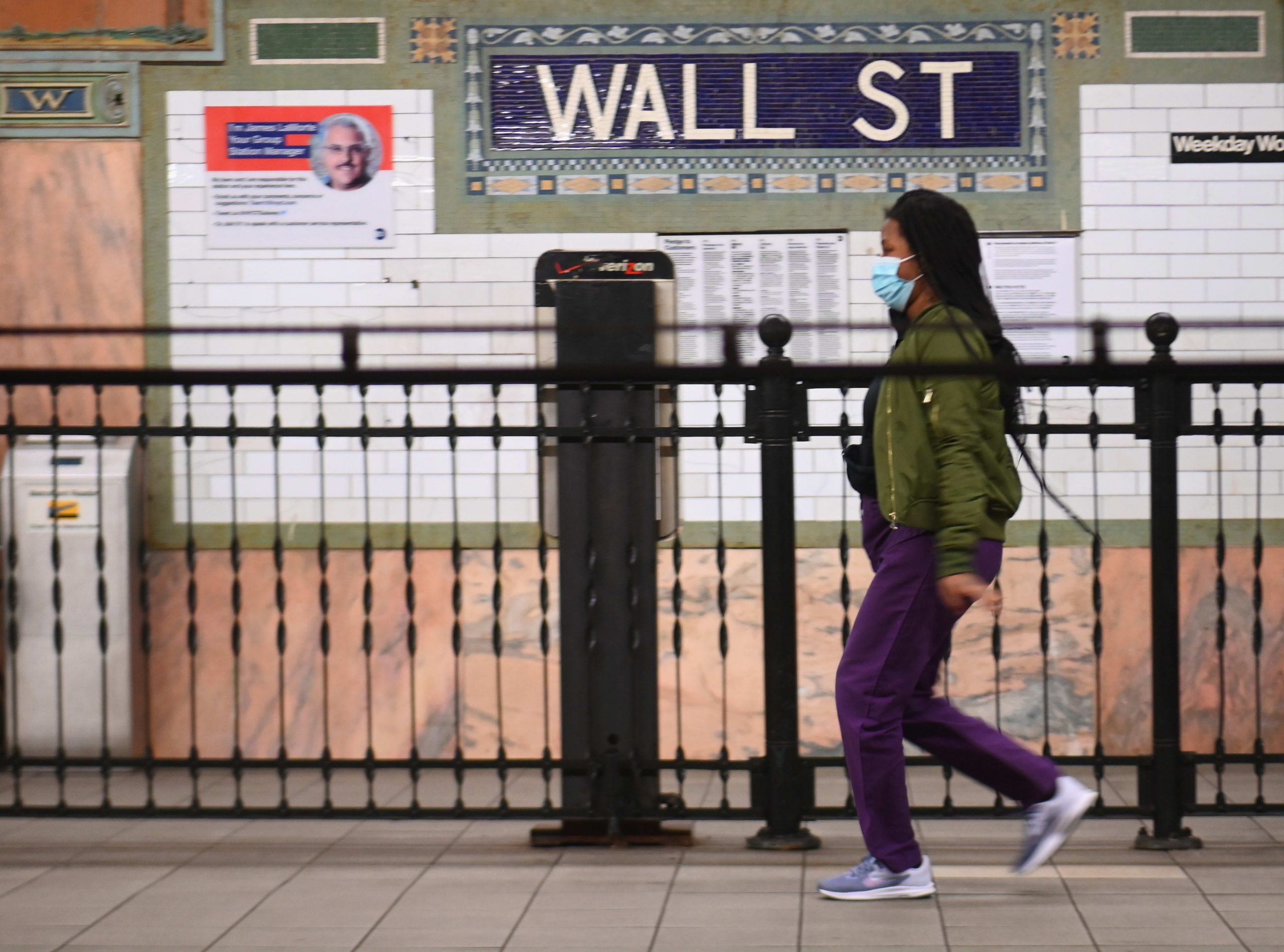 Stocks surged at the start of Friday’s trading in a bid to recover some of Thursday’s steep losses. The Dow jumped 837 points, but some of those gains were to be short lived. The major averages pulled back from their highs as some of the enthusiasm faded, although all three were on pace to register at least a 1% gain for the day. Friday’s move higher can’t make up for losses earlier in the week, however, and the major averages are on track to end the week lower.

This is a live blog. Here’s the latest:

With just under an hour left in trading, the major averages were higher, although still below their highs of the session. The Dow was up about 300 points for a gain of 1.2%. The S&P 500 rose 0.8%, while the Nasdaq traded 0.5% higher. All three remain on track to post steep losses for the week. – Stevens

With about 2 hours left in the trading day, the 30-stock Dow briefly dipped into the red. After surging more than 800 points to start the day on Friday, the Dow last traded up 13 points. – Fitzgerald

Amid a wild week of trading in the market one name stands out: Nikola Corporation. Shares of the battery-electric and hydrogen-electric truck maker doubled on Monday – just two days after the company began trading – and the following days saw the stock swing between gains and losses. The rate at which investors piled into the stock led to skepticism around whether the move is supported by the company’s underlying fundamentals, especially since Nikola has said it doesn’t expect to generate revenue until 2021. Founder Trevor Milton hit back at critics on Friday, saying “they think they are doing Nikola Motor harm but it actually makes us stronger and people love us more.” – Stevens

Stocks continued to fall from their highs of the day in afternoon trading, with the S&P 500 dipping into negative territory at one point. The Dow last traded 116 points higher – after earlier gaining more than 800 points – while the S&P 500 advanced 0.3%. The Nasdaq Composite was flat. – Stevens

After what will likely be the first down week in four, JPMorgan said it feels comfortable getting more bullish and buying the dip in the market. “With the recent market pullback, we are again more comfortable with taking a positive view – as positioning in equities did not increase significantly and China risks appear to be abating,” JPMorgan’s global quantitative and derivatives strategist, Marko Kolanovic, said in a note to clients on Friday. Kolanovic sees equity investors getting off the sidelines if volatility stays at these heightened levels. “Over the summer, if volatility stays at these levels, systematic investors will likely add to equity exposure and at some point HFs will likely follow, or will opportunistically buy the dips,” he added. – Fitzgerald

12:06 pm: Markets at midday: Stocks claw back some of Thursday’s losses

The major averages were up sharply on Friday as Wall Street tried to regain its footing following the steep market drop on Thursday. The Dow jumped 477 points, or 1.9%. The S&P 500 advanced 1.5% while the Nasdaq gained 1.4%. Still, the Dow and S&P 500 remain on pace for their biggest one-week decline since March. — Imbert

The Cboe Volatility Index, a measure of investor fear, continued to spike on Friday as the stock market swung for a second day. The index is above the 42 level. Earlier in the week it was around 26. The index has surged after a 1,800 point drop for the Dow Jones Industrial Average on Thursday, followed by a rebound on Friday. – Fitzgerald

Some of Thursday’s hardest-hit names surged during early trading on Friday. – Francolla, Stevens

10:24 am: Cramer suggests amateur investors are being gamed by Wall Street pros

CNBC’s Jim Cramer argued Wall Street investors may be tricking amateur investors on platforms such as Robinhood by piling into beaten-up but popular stocks like airlines. “It’s a game. If it weren’t securities, let’s say it was monopoly, let’s say it’s Draft Kings … it would be so much fun,” Cramer said on “Squawk Box.” “Pick a couple of stocks, you gun them in the morning, and then you hope people are stupid enough and they buy them.” The “Mad Money” host referenced shares of American Airlines and Carnival Corp. as two examples. Both stocks were up double-digits in premarket trading at the time of his comments.

“If people wanted these stocks, there would be plenty of supply if they would just wait until 9:30 a.m.,” Cramer said later on “Squawk on the Street.” “But no, they’re fomenting action. Once you foment action, it brings in suckers and then maybe they’ll buy the stock thinking that there’s something going on.” – Stankiewicz

10:10 am: Consumer sentiment rises more than expected in June

Data compiled by the University of Michigan’s Surveys of Consumers showed U.S. consumer sentiment advanced more than anticipated this month. The index of consumer sentiment came in at 78.9. Economists polled by Dow Jones had forecast a print of 75. Richard Curtin, chief economist of Surveys of Consumers, said sentiment was “paced by gains in the outlook for personal finances and more favorable prospects for the national economy due to the reopening of the economy.” Curtin noted, however, that “bad times financially in the economy as a whole during the year ahead were still expected by two-thirds of all consumers, and a renewed downturn was anticipated by nearly half over the longer term.” —Imbert

Shares of banks and other financial companies rose in early trading on Friday after being hammered during Thursday’s sell-off. Citigroup, which dropped more than 13% in the previous session, surged 5.9% in the opening minutes. Wells Fargo and Morgan Stanley both rose more than 4%, while Goldman Sachs gained 3.9%. —Pound

9:55 am: Big Tech rises along with the broader market

Shares of major tech-related companies rose broadly along with stocks benefiting from the reopening of the economy. Facebook, Amazon and Alphabet all rose at least 2%. Netflix gained 1.7% while Apple advanced 3.2%. Recently, some of these stocks lagged groups such as airlines and cruise operators as expectations of an economic recovery increased. —Imbert

Stocks most sensitive to the economy’s reopening bounced back on Friday, after finishing Thursday’s session sharply lower. The SPDR S&P Retail ETF (XRT) gained more than 3%, while the NYSE Arca Airline index rallied more than 11%, led higher by a 15% pop for American Airlines. United and Delta were each up more than 10%, while JetBlue rallied 9%. Royal Caribbean, Norwegian Cruise and Carnival Corporation all gained more than 11%, although these stocks are still sharply lower for the week. – Stevens

9:30 am: Stocks bounce from losses as Dow advances more than 600 points

The major U.S. stock indexes opened higher across the board on Friday and pared some of the steep losses suffered in the prior session. The Dow rallied 680 points immediately after the opening bell, a gain of 2.7%, while the S&P 500 added 2.5%. The Nasdaq Composite, the relative laggard, climbed 2.3%. The gains on Friday came after the major indexes clinched their worst day on Wall Street since March on Thursday. — Franck 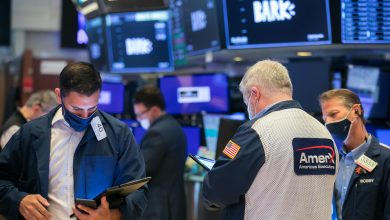 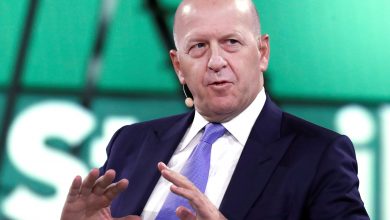 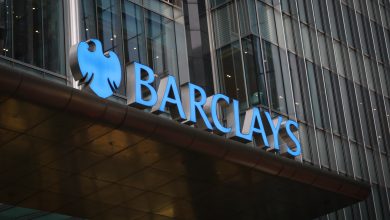 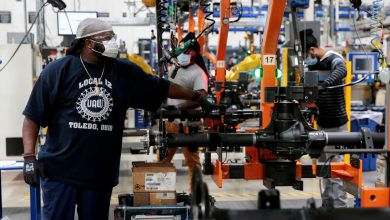