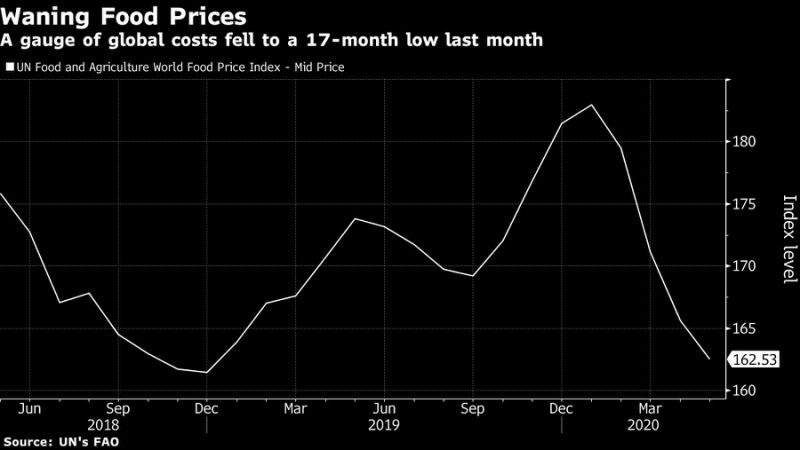 The World Health Organization said cases in Africa are accelerating, with 70% of deaths in five nations. Tokyo will enter phase three of reopening, encouraging remote work and staggered commutes.

Moderna expects to begin a final-stage clinical trial of its vaccine in July. Regeneron Pharmaceuticals started human tests of a new antibody cocktail.

New York reported 36 deaths, down from 53 on Wednesday, Cuomo said, the fewest in almost three months. New cases rose 0.2%, or 736, in line with the weekly average.

South Africa has conducted more 1 million coronavirus tests so far and it is making steady headway in addressing a results backlog, the government said. Cases rose by 2,430, to a total of 58,568 — the most in Africa. More than 2,000 cases have been diagnosed for eight straight days.

Denmark will allow weddings and private parties at restaurants and hotels to continue after midnight, reversing its earlier stance, TV2 reported. The government had set an end time out of concern that no restrictions would create confusion and loopholes. Bars and night clubs must close at 12 a.m.

The spread of the coronavirus in Africa is accelerating, the World Health Organization said, with total cases reaching 200,000 less than three weeks after the first 100,000, a milestone reached in 98 days. The continent accounts for less than 5% of global cases.

Treasury Secretary Steven Mnuchin said the U.S. “can’t shut down the economy again” even if there is another surge in coronavirus cases. “You create more damage, not just economic damage — medical problems that get put on hold,” Mnuchin said on CNBC.

A shutdown can be avoided if cases surge, he said, because Covid testing and contact tracing are improving and officials understand more about how to contain outbreaks.

Nonprofit groups unable to raise funds during the pandemic may get help from the Ford Foundation, which plans to sell $1 billion of bonds this month to provide grants for struggling organizations, President Darren Walker said. Charitable giving has slowed as donors fear an economic recession.

The Riksbank is still analyzing the true economic cost of the virus, but the latest data suggest that Sweden is “coming out relatively well compared to other countries,” Deputy Governor Per Jansson told reporters in Stockholm.

“It’s reasonable to believe that the immediate GDP blow may turn out a little bit milder than in many other countries,” he said. “It might have to do with the fact that we’ve had a less brutal approach when it comes to restrictions. It can’t be proved but it’s a reasonable hypothesis.”

Tokyo will continue to take measures against the coronavirus because it will take time until a vaccine is developed, Governor Yuriko Koike said at a briefing. The city will enter “Step 3” of its reopening roadmap from midnight local time. It will encourage working remotely and staggered commutes, and will continue with epidemiological investigations to prevent a second wave.

Initial jobless claims for regular state programs totaled 1.54 million in the week ended June 6, down from 1.9 million in the prior week, Labor Department figures showed Thursday. Applications for unemployment insurance have fallen consistently each week since peaking at the end of March, but the volume of weekly filings is still more than double the worst week during the Great Recession.

The median estimate in a Bloomberg survey of economists called for 1.55 million initial claims in the latest week.

Moderna Inc. said it had selected a dose for a final-stage clinical trial of its coronavirus vaccine that should begin in July. The final study, which will include 30,000 people, will be conducted in collaboration with the National Institute of Allergy and Infectious Diseases in the U.S. Its primary goal will be to show the vaccine prevents people from developing symptoms of Covid-19.

Coronavirus contact tracers failed to track down the details of a third of cases referred to them in England in their first week of operation. Of 8,117 people, only 5,407 were reached and asked to provide contact details, the Department of Health and Social Care said in a statement. The teams identified 31,794 contacts in the first week, and just under 26,985 were advised to self-isolate.

Norway’s Transport Minister will allow SAS, Norwegian Air and Wideroe to fly with full aircraft, broadcaster NRK reported, citing unidentified people. The move will bring Norwegian regulations in line with the European Union Aviation Safety Agency. Carriers in Norway had been required to keep an empty seat between passengers.

Regeneron said it had begun human trials of a new antibody cocktail for Covid-19, part of an ambitious clinical-testing plan that could lead to a new treatment option by the end of summer if all goes well. In a statement, the company said it will test a two-antibody combination in a wide variety of people, including those already sick with Covid-19, as well as healthy people at high risk of being exposed to the virus.

“Our data suggests putting together multiple antibodies could really be the key to having a major impact on the virus,” George Yancopoulos, the company’s co-founder and chief scientific officer, said in an interview. He said lab studies that Regeneron plans to publish soon show the coronavirus will quickly develop resistance to a single antibody-based treatment, but that when multiple antibodies are combined the virus doesn’t fight them off.

Separately, Sorrento Therapeutics shares rose 15% after the company announced that its submission of an Emergency Use Authorization application for a Covid-19 test is under review at the FDA.

Third of U.S. Renters Worried About Next Payment (7 a.m. NY)

About 31% of renters responding to the U.S. Census Bureau’s Household Pulse survey in the five weeks through June 2 said they had “little or no confidence” they can make their next payment on time.

By comparison, 11% of households with a mortgage failed to make their last payment and 16% of the survey respondents said they fear they can’t cover the next one. This could impact consumer spending and the economic recovery.

Oman has discussed the possibility of financial aid with other Gulf states to help it cope with the economic impact of the pandemic and low oil prices, according to two officials in the region and a U.S. government official familiar with the contacts.

The topic was one of several discussed at recent high-level political meetings between Gulf officials, two of the people said. The discussions are preliminary and nothing has been decided, including the scope or type of support that could be on the table, they said, declining to be named because of the sensitive nature of the conversations.

A senior official at Israel’s Health Ministry is under pressure to explain why he allowed businessman Teddy Sagi, founder of gambling software company Playtech Plc and the owner of London’s Camden Market, to enter the country without undertaking the compulsory two-week virus quarantine.

According to an N12 TV report, Health Ministry Deputy Director General Itamar Grotto gave Sagi the go-ahead to fly in by private plane from Cyprus last week to attend a party. He left Israel the same night, the report said.

“The granting of the permit was a mistake,” the Health Ministry said. “This was a serious error in judgment and it will be investigated.” Grotto was asked in a June 10 letter to provide an explanation in writing by the following day.

This year’s dairy exports may post the steepest decline in three decades, and fish demand has been “severely” dampened by the pandemic, the United Nations’ Food & Agriculture Organization said Thursday in a 2020 outlook report. Growth in global meat trade will also slow as shuttered restaurants and weakening economies spur consumer cutbacks.

The products are among those facing swift impacts from the coronavirus, and food markets are likely to see “many more months” of uncertainty ahead, the FAO said. Salmon demand will shrink 15% or more this year, and milk sales are likely to stay subdued.

It’s “still uncertain” how many people are carrying Covid-19 without displaying symptoms, the WHO’s coronavirus special envoy, David Nabarro, told an Irish parliamentary hearing by video conference. Nabarro described the virus as a “continuous threat” and didn’t appear to be seasonal.

While it would be “reasonable” to make face coverings on public transport compulsory, Nabarro doesn’t expect a blanket 14 day quarantine period for travelers sticking for long in any European country. Instead he expects countries to establish air links with specific nations based on how they are managing the virus.

The worst may be over for Canada’s economy, but the nation’s more cautious approach to reopening means a slower rebound than in the U.S.

South African mining output dropped the most since at least 1981 in April, when the first full month of restrictions to curb the spread of the coronavirus pandemic brought almost all economic activity to a halt. Total production decreased 47.3% from a year earlier, compared with an 18% decrease in March.

The death toll from the pandemic in Indonesia reached 2,000 as a surge in infections across the archipelago saw fatalities more than double in the past month. The country reported 41 deaths in the past 24 hours, the most since June 7, and new cases rose by 979 to 35,295.

Indonesia’s fatalities are the highest in Southeast Asia and the total number of infections now only trails Singapore in the region, according to data from Johns Hopkins University.

bloomberg.com” data-reactid=”94″>For more articles like this, please visit us at bloomberg.com 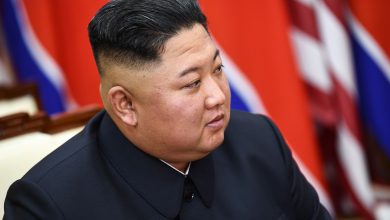 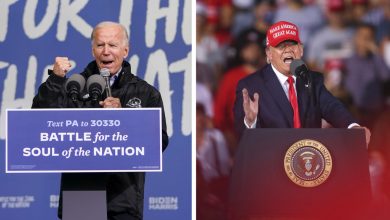 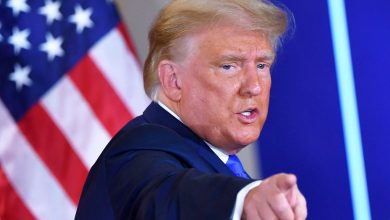 What’s behind Trump’s leads in Michigan and Pennsylvania 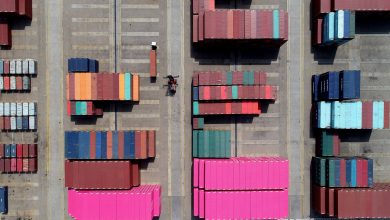 China says its yuan-denominated exports and imports jumped in June