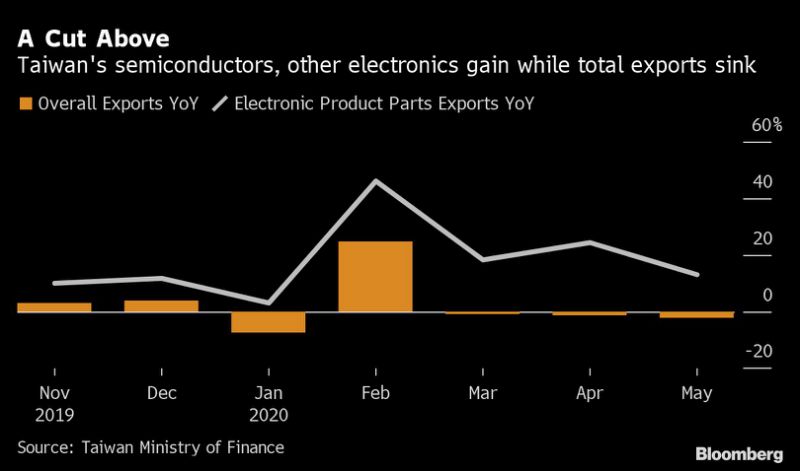 (Bloomberg) — Global trade data in the Covid-19 era has been generally abysmal, but look a little closer and the electronics sector that fires Asia’s trade engines could be headed for a pretty good year.

In South Korea, semiconductor exports rose in May and imports of equipment used in producing semiconductors surged 168%, trade ministry data show. Taiwan’s electronic-component exports, which include chips, grew 13.2% in May to $10.2 billion, even as total exports fell 2% from a year earlier.

The electronics industry is holding up relatively well amid the pandemic as companies adopt new technologies — including 5G equipment and automation tools — that make it easier for employees to work remotely. A sustainable boost will depend on whether consumers return with similar vigor, and whether other factors such as U.S.-China tensions don’t interfere with digital demand and supply.

“The tech industry seems to have decoupled from the overall economy somewhat, as the tech industry is still growing well” and has been “relatively immune to Covid-19,” Mark Liu, chairman of Taiwan Semiconductor Manufacturing Co., said at a shareholder meeting June 9.

TSMC, the main chipmaker for Apple Inc. and Huawei Technologies Co., still plans to spend as much as $16 billion on capacity upgrades and technology this year, and expects revenue gains in the mid- to high-teens, Liu said. Covid-19 has helped drive some budding technologies related to remote work and education and social distancing, he added.

TSMC shares have risen 27% since their lowest close for the year on March 19, slightly less than the 32% gain in Taiwan’s benchmark Taiex stock index in that time.

Amid generally awful export figures from the region, “the one bright spot is semiconductors,” said Trinh Nguyen, a senior economist at Natixis SA in Hong Kong. “A lot of this reflects the product cycle and also the global lockdown and suppression that favor the ‘digitalization’ of economic activities, driving demand for electronic goods like chips.”

It helps that some of Asia’s most tech-focused economies have had relative success in containing the virus: Taiwan has reported just seven virus deaths, South Korea flattened its curve fairly early and Singapore’s fatality rate is among the world’s lowest. That gives momentum to efforts to restart tech engines and get consumers used to new ways of doing business.

“We’re seeing more countries pledging economic reforms, and there’s increased urgency for a stronger technology push to lead the economic recovery,” said Zhao Defa, an economist at Continuum Economics in Singapore. “Given that South Korea and Taiwan are the world’s main semiconductor producers, they will be beneficiaries.”

Some of the boom is specific to the health crisis, amid a global scramble for medical equipment and demand for video-conferencing and other technologies as work and school shift more to people’s homes.

China’s medical exports and shipments of high-tech electronics jumped in both April and May, for example, while Singapore’s pharmaceutical shipments surged 174% in April from a year earlier. Further gains may not be as pronounced.

Consumer demand is still lagging, though. South Korean shipments of computer products jumped 83% in May, their eighth straight monthly gain, but sales of smartphones dropped 22% and consumer appliances fell 37%. Globally, smartphone shipments are expected to fall 11.9% this year — their biggest annual drop ever, according to data from research firm IDC.

While 5G, high-performance computing and artificial intelligence will all create demand for Taiwan’s exports, setbacks from Covid-19 and U.S.-China tech tensions could constrain that progress, Beatrice Tsai, director-general of the statistics department at Taiwan’s Ministry of Finance, said June 8.

Still, analysts at Citigroup Inc. see a risk that U.S.-China tensions will weigh on chip demand. China’s buildup of chip inventories was intended partly to get ahead of a U.S. ban on Huawei set to take effect later this year.

China’s export orders have taken a hit from lockdowns in the U.S. and key European markets, said Rajiv Biswas, APAC chief economist at IHS Markit. A second-half recovery in those economies, as well as Christmas orders, could drive a rebound in tech exports, he said.

Governments have tried to stay focused on the long term, aiming to take advantage of the tech sector’s relative advantage in the pandemic by providing special support for electronics firms and new technologies. Singapore pledged S$500 million ($360 million) last month to help businesses in their digital transformations, including moving hawker center stalls to e-payments, and is spending another S$3.5 billion on information and communications technology to mitigate the virus outbreak.

When the virus’s spread threatened Vietnam’s burgeoning tech industry, the government granted an exception to its otherwise strict lockdown measures: Samsung Electronics Co., which makes about half of its smartphones in factories near Hanoi and is one of Vietnam’s largest investors, was allowed to shuttle in more than 1,000 engineers from South Korea.

“The recovery will be digital,” Anand Swaminathan, senior partner and head of McKinsey Digital in Asia, said in a June 9 interview. Asian governments are “all starting to figure out what their investment strategy is on digital.” 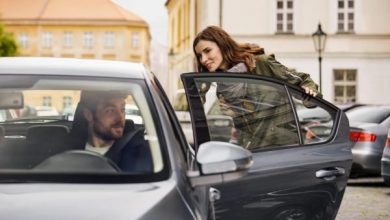 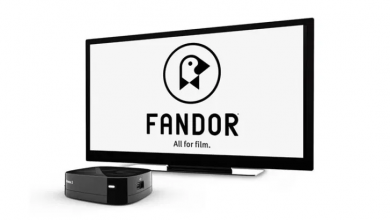 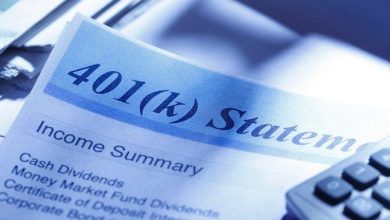 Why Might Your 401(k) Be Unavailable After You Leave a Job? 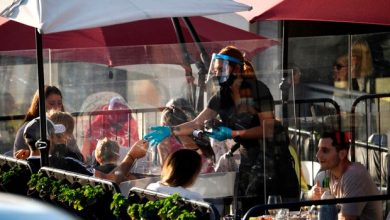 Value Funds Could Start Slowing Down. Where to Find the Next Leg of Gains.